The Racists Among Us: The inconvenient talk within former Soviet Union immigrants 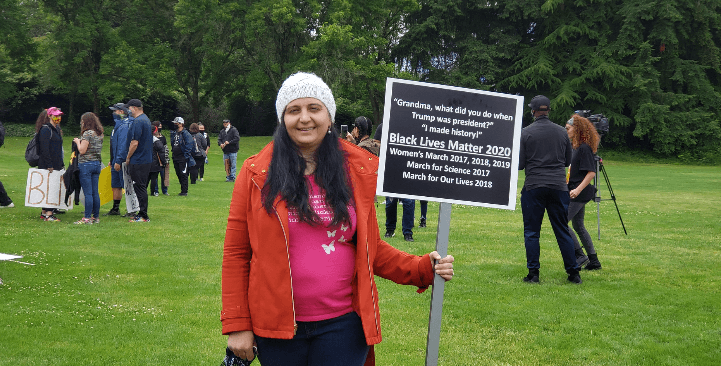 “In the light of the Black Lives Matter movement in America, it is time for us, ex-Soviets and Eastern European Diaspora in the USA, to have an honest conversation about what part of history do we want to be on? Let’s face it, most of us came to America with our own misconceptions about “the other”. How many of us heard or told anecdotes about greedy Jews, or laughed at the “slow thinking” Chukchas, or were aware of the joke that was most insulting to me personally: “How many Moldovans takes to change a light bulb?” These were all discriminatory, disparaging micro-aggressions covered up under umbrella of jokes.

Once in America, we have not freed ourselves from our old baggage but instead many of us picked up on the still alive racist language towards the people of color. What I hear all around our community is disparaging, disheartening, and so last century.

Exhibit A: The generalization.  Someone described his “horrible” experience when he flew into Atlanta airport. He was met by a black, “flat and lazy” (direct quote) customs officer, who was very slow in processing the line. His conclusion: “They (black people) are all lazy”. First of all, I have yet to meet a Customs officer who is in a hurry, regardless of their race. Next, let me ask you this: “How many lazy white people do you know?” I know at least a few in my family, not to mention that almost all my uncles always were heavy drinkers. Yet, it never occurred to me that I need to call the entire white race lazy or to call everyone in my ethnicity alcoholics. Every person is different, and every race has their own share of hardworking and lazy people.

Exhibit B: The disregard.  Direct quote from someone’s post: “So much trouble for a dead ‘negro’”. Just hear how dehumanizing this sounds. It implies that the person of color is less of a human, not worthy of someone to cry over him. If this is not racism, I don’t know what it is.

It doesn’t start or end here. We have a history of disparaging other ethnicities. How about when some in our community of immigrants (!) cheered the separation of the kids of asylum seekers from their parents at the border? “They (the kids of migrants) deserved this,” they said, “because their parents crossed the border illegally.” Give me a freaking break! How many in our diaspora have a member of their family, or know someone who crossed the borders of Europe undocumented? Therefore, forgive me, the obvious deduction that for some of us, it’s not OK because this time the Hispanics did what we have done previously.

We can see the first stage unfolding in the streets right now. People on the opposite side are literally marching with Nazi and Slavery era Confederate flags, yelling at the protesters that their lives don’t matter. We see the escalated brutality in the streets, where the police officers are using against their own citizens tear gas, rubber bullets, slashing tires of the protesters’ parked cars, dumping bottles with water and medical supplies brought at the sidelines by the medical workers, targeting reporting journalists.

All these are violations not only of the USA laws but they’re considered extreme by Geneva Convention laws, that specifically prohibits the use of tear gas, and destruction of medical supplies in war zones. Those are the signs that we are already progressing to stage two. Do we really want to go to stage three?

This is the time to educate ourselves about the issues of injustice that are happening towards the people of color in America by listening to them. This is not going to be an easy conversation. Some of us will be uncomfortable and therefore resentful to their concerns but it doesn’t matter how that makes us feel. It is not about us. At the very least, we should acknowledge that their pain in real, like we would expect if we’d have a relative killed unjustly.

This is not the time to be silent but rather be an ally for people of color. We need to stop using the subtle and not so subtle racial and discriminatory language, even if jokingly. Call out the people in our community who use racial slurs. Take a stroll in your neighborhood, participate in a march, use your platform to support them. You may not realize but it’s in our self-interest to do so because justice for a minority is justice for everyone, Eastern European immigrants including. This is history in the making and we are active participates. Let’s be on the right side of history!