Kickass is Her Middle Name 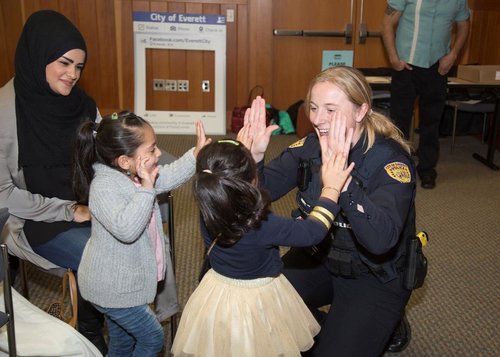 The original interview was published in the Romanian language publication Ziarul de Garda on 8/2/2018. https://www.zdg.md/editia-print/social/diaspora/de-la-politie-cu-dragoste. Below is the summary of the interview in English.

Yuliya Wold– a mathematician from Odessa, Ukraine, an American Crime Prevention Officer and a hostage negotiator, a mother of two teenagers, and a very social-butterfly-e person. How do all of these fit in one woman? Only Lord knows. Nothing in her previous life could predict that Kickass will become her middle name. One sunny day, when she turned 30, she decided it was time to do something meaningful with her life. “Why not go for a ride along in a police car?” She thought and so she did, and it opened her eyes to opportunities she didn’t know she had and the risks she rushed to take.

What did you like about that ride along, Yuliya?

“I really enjoyed not knowing what’s going to happen. With my math degree, I worked in banking. There, everything was so predictable. I knew everything that was going to happen for months ahead on any giving Wednesday. At that ride along, I had no idea what would happen, and I really liked that.”

How does a woman, especially an immigrant woman, become a police officer?

“I’ve always been a very driven kid growing up, so I always knew what I want in life, but coming to America gave me so much more other opportunities. As far as difficult, I think it’s actually a lot easier here than it would have been in my home country. There, unless you have the right connections, or you grew up in the right cast, or have a lot of money, you can make a name for yourself. Here, without any family or connections, I was able to find what I was passionate about and pursue it. Any kind of hurdles, that I came across, were a lot easier to overcome because the opportunities are just so plentiful here.

But I wouldn’t say it was easy. After the written test (grammar and math), you have to take the physical ability test. You have to run 300 meters, then a mile and a half, and do a minimum of 70 pushups in a minute. You have to pass a sight and medical checkup, and go through a rigorous background check. My background check took a while because the majority of my life I lived outside this country. They even contacted my grandparents back in Ukraine. They do all kinds of digging, as far as who you are and what you stand for, including all current and past employers, so it’s a very thorough investigation, because if they decide to hire me and give me a gun, and send me through Police Academy, that’s a huge investment of time and money in me.

After all of that, I went to the Police Academy in Burien, WA for 10 weeks and for 4 months after that I was in Field Training in Everett. That’s where you get training on what are the procedures, you learn about the type of crimes there, and you get acclimated to the city and driving with police lights on. Since 2011 I work in Everett Police Department.”

Now, how does a mathematician become a hostage negotiator?

“The mathematician’ skills always come in handy in my profession, but that’s only one thing. Another thing is that I have always been out and about, I love interacting with people. Because I like talking to people, I was assigned to work as a hostage negotiator a few times. That is one of the proudest and coolest things that I’ve done since I’ve became a police officer.

The hostage negotiation team is a part of SWAT. In our area, we have a SWAT team comprised of officers from city of Everett, Lake Stevens and Snohomish County Sheriff’s Office. It consists of a tactical team. These are the guys who wear helmets and break the doors down, who look exactly like on TV. Then we have coordinators, who deliver all the equipment, and a team of 6 negotiators, and I’m one of them.”

What does it mean to be a hostage negotiator?

“The negotiator’s job is to peacefully get out a person, who is a barricaded somewhere, like a suicidal person or a hostage situation. It doesn’t always come to a peaceful resolution, but this is what we strive for.

To explain how it works in the world of negotiators: you have the primary negotiator, the secondary or coach, that’s the person with the headphones, who listens to what’s going on, and writes you notes. The only person who talks with the barricaded person is the primary negotiator, the secondary negotiator doesn’t talk. We have a liaison, who is a conduit between the negotiations team and the tactical team, and the command center. The person in the intel team is running all the data on the individual whom we are in contact with. He identifies any family connections, triggers, any mental health history. Everybody has their own roles and works together as a team to end the stalemate.”

What was your most memorable day as a negotiator?

“The most recent one, where I was the primary negotiator, happened in the middle of the night in Lynnwood. We were dispatched to negotiate with a man, who was highly intoxicated and who was threatening to shoot his parents. Luckily, his parents ran off.  He, on the other hand, barricaded himself in his trailer.

This guy was interesting because all that he was doing was yelling profanities. It was a very long process. I was on that call for 6-7 hours. Eventually we got him to surrender part of his equipment, and we came to somewhat of a peaceful ending. Nobody got hurt, and that was the best part of the day. It’s a fantastic feeling knowing that you were a part of coming to that resolution.”

Your current job title is Crime Prevention Officer. What does it mean?

“A lot of it is public community outreach. Also, Everett Community College has refugee forums for refugees coming from around the world, as far as Nepal and even from Ukraine. We, the police officers, try to talk to fresh immigrants, some of whom have been in the country for only a couple of weeks, about things and resources that are available to them. It’s a lot easier for me to connect to immigrant communities, because I’m an immigrant myself.

The first thing that I ask them is: where did they come from and what was their previous experience with the police? Most of them, in their country had a very negative and fearful experience with authorities. I talk to them about what should they expect from the police in America. From example, if you get pulled over at a traffic stop, don’t get out of the car, like back home, stay in the car, and wait for the police officer to approach you.

Then we talk to them about calling 911 for emergencies. Once we were called to a hit and run accident, where we found a person who was too scared to call 911, because he just came in the country. When the other driver took off, he didn’t know what to do. We also teach them not to be afraid to call 911, even if they don’t speak English, because the dispatchers are trained to switch to the language line instantly. We tell them to memorize their address, because if we don’t know where they are, we can’t help them.”

Would you do it again?

“Oh, absolutely! I love my job! I had two knee surgeries and two ASL torn up since I started this job, which was not a lot of fun, but I would have done it again in a heartbeat, any day, over and over again. I really love this job!”