by Irina VanPatten | Jan 2, 2019 | Funnier than Fiction, My Published Work 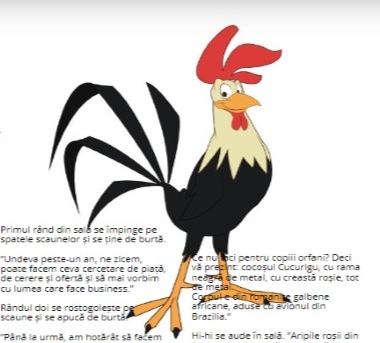 This story was published in Romanian publication Hora in America in January 2019.

Vasily got up from his chair, cleared up his throat, and looked around the room at a group of people, who seemed more educated, richer and more important than him. He fixed his Moldovan white shirt with embroidery, and straightened his hat with a live red rose on the left side, not because he needed to, but because he felt uneasy. He gathered his strength and began his speech:

”What can I tell you about myself? Or about my business? What will be interesting to you? How many thorns a rose has? Or how does the fertilizer smell?” The room began to whisper. “I’ll start with what my mother, a Romanian teacher, taught me: “Start from the beginning: Who? When? How and Where?”

Who? I’m Vasily, the founder of Pretty Wild Flowers, a startup, as they call it around here.

Where from? From San Francisco.

When? I started my business 5 years ago.

Why? I don’t know why? Maybe I made a mistake. When I proposed to my wife (he pointed at his wife on the other side of the room), I didn’t have a choice, because she loved flowers.” The room started laughing. “Not a mistake with my wife, Vasily autocorrected, but another mistake: with flowers.” The room began to laugh even louder, but Vasily didn’t even change his voice.

“After a few months in the flower business, we realized we had competition from Wal-Mart, Costco, Safeway. “People seating in the first row leaned back in their chairs, holding their bellies, stomping their feet almost simultaneously.  “Then we tried something different. Let’s make flower arrangements, we said. So we did! But a few months later, we realized we have competition from Wal-Mart, Costco, Safeway.” All hell broke loose. The room released a thunder of laugher in the air.

“After a year or so, we said we probably should do some market research, pull some supply and demand data, talk to somebody who has a business.” People in the second row leaned forward, almost dropping off their chairs. “Eventually we decided to make flower arrangements in a metal frame. Like this rooster on the table with a flower body. I took them to local farmers’ markets. They were a hit, everyone liked them, but everybody had an excuse of why they can’t buy them: “Țhey’re too big. They’re too heavy. We’re tourists and we can’t take them on the plane.” People in the third row roared, as if they were listening to a comedian.

“After three years we said, maybe we should take a break for a month or two to recover financially from our business. The break took nine months.” The audience could not contain itself.

“Then we heard about a gathering of some Moldovans in the area last year, we said let’s make some flower arrangements and bring them to the event. There we met a Moldovan, who introduced us to another Moldovan, who helped us start the website, and the business got its wings again. “Vasily lifted his arms in the air to show how his business took off. “If we previously could barely sell one flower arrangement per month, now we sell 4-5 a week. So how they say in America: “Don’t give up! And stay close to your community!” The room exploded in ovation.

“This year we heard about this charity raising money to help orphaned children in Moldova. What wouldn’t one do for orphaned children? I present you: Cucurigu, the Rooster with a metallic black frame and a metallic crest, also red. His body is made of African yellow daisies brought on the plane from Brazil. “Ha-ha!” The crowd chanted. “His wings are made of red flowers …” Vasily stopped for a moment, trying to recall the name of the flower, then continued: “Just some nameless local flowers. The long tail is made from branches with white flowers … ” The room tried to guess: “Oleander! Jasmine!” Vasily shook his hand:

“Don’t bother, I don’t know that one either.” The room laughed in support, feeling fully invested. Although they realized that Vasily made a more serious mistake: he should be a humorist, and not a florist!

“Now we’ll start the rooster’s auction with $200.” A young man in a tight pair of jeans, a Silicon Valley inhabitant, no doubt, fixed his glasses and raised his hand: “$300!”

“Thank you, but my wife has been working for 4 hours at this handsome devil, have mercy!”

“$500!” A man in an expensive navy suit, a salesman of some sorts, rose his hand in the back of the room.

“That’s excellent, but you realize that these flowers were brought from Brazil, and I don’t sell it for myself but for orphaned children.”

“$1,000!” A woman dressed in bright colors like Cucurigu, the Rooster itself shouted out. Vasily wiped the sweat off his forehead:

“What a perfect match! Come take this bird to your family!”