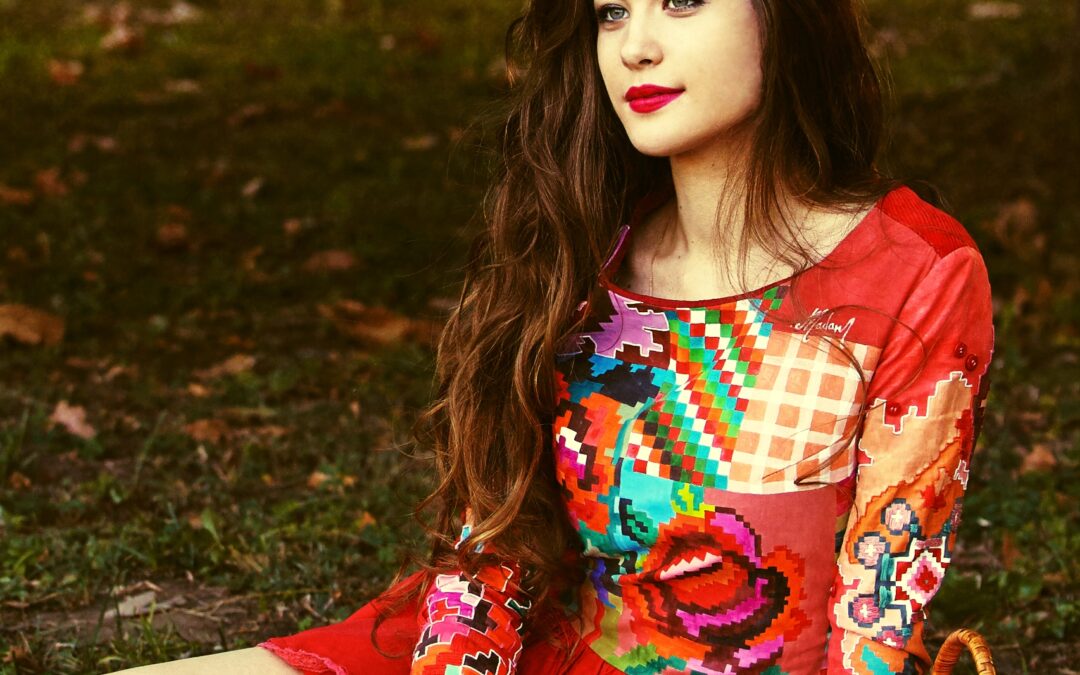 When you are young, you’re like a lioness. Jump into the deep waters, walk into the darkness, move across the world and start over? Anything is possible! She set her bar high. Though, she never thought, she’d end up here, in America. Why would she? It was too far, too unreachable, too big to dream of.

Irina Madan, a graduate from an Academy of Music and Fine Arts in an unknown to the fashion world Eastern European country called Moldova, dreamed big, but not so big.

“I originally wanted to establish myself in Europe,” she says. “I never thought to leave my home country permanently. I felt the best there and the most creative. In 2013, I started a business of handmade dresses, that I was sewing from the cotton fabric, hand painted by me, based on Romanian ethnic style. I was doing very well.

Honestly, there was such a wave of success, that I didn’t know what was happening. I was not prepared for anything of this magnitude. Besides, I was an artist, I didn’t know how to manage a business, how to communicate with customers. I had more orders that I could fulfill.”

“How long does it take to make a dress like this?” I ask her.

“It depends on the painting and the dress model. On average, it takes from 5 days to 3 weeks, and maybe even more. It also used to depend of my state of mind, but I learned to get over these things and become a robot.”

“There is an interesting story there. In 2011 I came to the United States for the first time as a student, and stayed in Florida. It was so different from everything I knew, that I got my first cultural shock. After returning home, I applied for the Green Card Lottery. Then totally forgot about it. There was so much going back home, that I didn’t even have time to think about it.

I took part in my first ever fashion show in Paris, totally not understanding what I was getting myself into. Starting with the simple things, like logistics. My friend and I had to carry my show collection in the regular public metro. It was crazy! Now, I laugh every time I think about it.

After that I set my eyes on Venice, Italy. But Venice is more suited for artistic endeavors and less practical to live in, so I had to rethink that option too. I finally made my mind to move to Switzerland. Then, all of the sudden, in 2015 I got this letter that I won the Green Card Lottery. I thought someone was joking, but it was true. For about one year after, I stayed in Moldova, trying to choose between Switzerland and America. In the end, I chose San Diego because it’s such a special city for me.”

“Why is San Diego special for you?”

“I feel very satisfied here, at peace with myself, and inspired by this city. Though, when I arrived in San Diego, it was tough. Nobody knew me, I had to start over. I had no orders for months. I was getting refusals from art festivals. I had a depressing period and I wanted to go back home so badly. I think every person who moved to a foreign place goes through these stages. But there was the light at the end of the tunnel.

In February 2018 San Diego Fashion Show let me know that I was among 15 designers selected out of 100 to participate in the show. Then in October 2018 at my second San Diego Fashion Show I took the third place with my collection of coats made out of hand painted material, called Young Lioness, Love. It was the happiest day of my life! A reward for all my hard work after my move to San Diego.

“Being a foreigner, is it easier or harder to break through with a designer collection in America?”

Until recently, I created my collections inspired by the Romanian ethnicity, but my last collection was totally different. I really wanted to do something different, because people started associating me with these ethnic elements only. Although, they are very dear to my heart, it will be boring for me, if I continued to do the same thing. I want to see what else I can do besides that.

In regards to how difficult is to affirm yourself in America, I can say it’s much harder to break through, if you are a foreigner. We leave our countries, where we were born, where we feel good, and we go to the big unknown world to fulfill our dreams.

On the other hand, we bring to the market designs, that are completely different, and usually what’s different, it’s more attractive. Especially if the designer fights to have his or her own style. But no matter what, it’s very important to believe in yourself. You just have to overcome all the hardships and push through, because these difficulties build the road to our dreams. We should thank every barrier, because they help us grow and overcome our fears, and move forward.

“Do you have regrets, because you had to start over here, instead of building on your success back home?”

I have no regrets about any experience in my life, so far. It was a very difficult period, but it was as beautiful, as it was complicated. I was dreaming about this, but I thought that would happen later in life, maybe when I would be 50 years old. The road, we walk on, can’t always be straight, and all the events that happened, as windy as they were, kept leading me to where I’m now. I don’t know what the future holds in store for me, but I’ll take the next road without any hesitation.