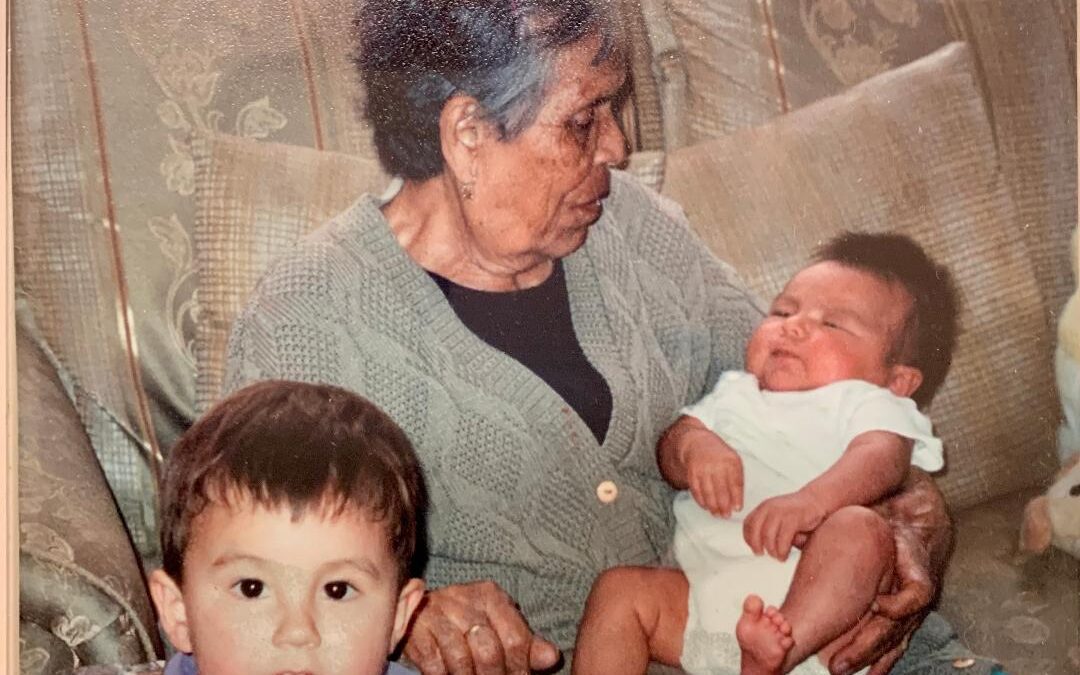 When Veronica Valdivia-Vera contacted me in response to my post about the series “Badass Grandmas” that I was putting together, I didn’t know that I would get two for the price of one. Both Veronica’s abuelas’ lives were so fascinating, that I couldn’t decide which one to keep, so I kept them both.

“Both of my grandmas are not from the US. They lived their entire lives in Mexico. Will that be a problem?” Veronica asked.

“Hell, no!” I said. “We are where we are today because of our grandmas, regardless of where they are from.”

“That’s such a wonderful idea,” she said. “to talk about grandmas.. It’s really easy to forget, especially moving to another country, what a huge influence they were in our lives, because we don’t think about them as often as we should.” And off we went.

“My maternal grandmother’s name is Guadalupe or simply Lupe,” Veronica started her first story. “She grew up in a very small village, where the the way of thinking was as old as the village itself. Women were not even allowed to go to school, so she barely finished elementary school. She got married at 14 and had 14 kids. That was her main job: have babies, and take care of her husband.

Fast forward to her fifties, and suddenly she lost her husband. He had a transportation business formed of three buses, like Greyhound routes, which always was a male dominated business. When my grandfather passed away, he left four buses: one for each son, and one for her to make a living on. My uncles, grandma’s sons, decided to take a bus route each and run it, because according to traditions, the older males take care of all the females, including moms.

But she stopped them: “Wait a minute. It’s not going to be good for business to break it up. I learned the business from your father, when he would confide in me or take me to meetings with him. If you guys trust me, let’s keep everything under my name and see how it goes. If you are not happy with my results, I’ll give you your rightful portion back.” And they agreed.

An uneducated, 50 year-old woman took over a business in a male dominated industry in the early 1990’s, which in a small village in Mexico is the equivalent of the 1970’s in the US. That in itself was inspirational. But the way she managed all the difficulties that came with it is even more amazing.

She had to deal with unscrupulous mechanics, who constantly tried to scam her on the price. For example, the mechanics would say: “So many things are wrong with your bus, that it will cost you $2,000.” Grandma would open the hood and say: “You think that I’m an old lady, and I don’t know what you are talking about, but I know exactly what’s wrong, and what you just said is not true. So do your job, and be honest with me, or I’ll take my business elsewhere.”

Then, when she expended her business and moved into the city, she had to deal with these brutal, cutthroat competitors. They would try to intimidate her and her drivers, but she would be fearless and go right up to them saying: “What you’re doing is not right. It probably makes you feel like you’re a big man, but actually you come across like a bully. If you want to talk business, let’s talk like civilized people.”

Sometimes, her own sons would try to undermine her, because she was a woman. Only now, when I’m in my 40’s, I understand what she had to go through: physically and emotionally. She was tough till her last year of her life, when she got very sick. In Mexico the buildings are not very disability-friendly. She couldn’t walk that much, when she got older, but she would walk that flight of stairs stubbornly, because she didn’t want to miss a business meeting. When she died, her business had grown to 15 buses. That’s how shrewd of a business woman she was.

“My paternal grandmother’s name is Conchita (in the cover picture with Veronica’s sons) short for Concepcion, which translates from Spanish as little sea shell,” Veronica continues. “She was an indigenous woman, a Chichimeca to be more precise.

She went through this classic story of women’s oppression in Mexico, where she didn’t have access to education, but on top of that because of her ethnicity, she was even more at a disadvantage. Her family lived on a farm, where they were servants of a very rich family. In the late 1930’s, one of her aunts was raped by the son of the villa owner. Defending his sister’s honor, her brother killed the rapist. That put in peril the entire family, because the villa owner was furious. “You killed my son, I’ll kill all of you.” he threatened. They had to flee the village and hid in the mountains for several weeks.

Eventually, they had to move out of the area. My grandmother’s part of the family moved to the state, where I was later born. Other members of her family moved to a different state. Because of that, they lost contact with each for four years. When the family moved into this small city, where they didn’t know anyone, and especially being uneducated, they lived in extreme poverty.

But my grandma was young and pretty. She met a man, whom she fell in love with, but when he got her pregnant, he abandoned her with his kid. Later she met another man who promised her love, and also abandoned her when she got pregnant. Now she ended up with two babies and with the stigma of being a single mother. Her second child would later become my dad. He remembers looking for food in the garbage cans, because they were so poor.

She finally decided she had enough of it, and put herself through school with as much help as she could get from her mother, who time was deeply ashamed of her daughter being a single mother. She managed to finish school and became a teacher. As a teacher, she was sent to this rural community, where she met a man, who ended up marrying her. He was not the best husband, but she stayed with him, because he gave her cover. In the eyes of society she wasn’t an outcast anymore once she got married.

To understand what she has accomplished, you have to understand where my grandma had come from. In 1940-50’s indigenous people were extremely discriminated against in Mexico. People would call them by a derogatory name “Indians”. Children of lighter skin were not allowed to play with indigenous children, because they were thought to be lower class. Indigenous women were considered uglier because they were darker.

What fascinates me about my grandma Conchita is that against all odds, starting her life as an uneducated indigenous woman, she brought herself up from extreme poverty, and got herself an education. She was always very intelligent, for as long as I can remember. She read her newspapers every, continuing into her last days. Even later in life, when she lost her sight and couldn’t read, she would ask someone else to read it to her. That’s the power of education. So both my grandmas were fierce women and my inspiration.”