Grandma Eva Pearl: The Woman Older than the Century 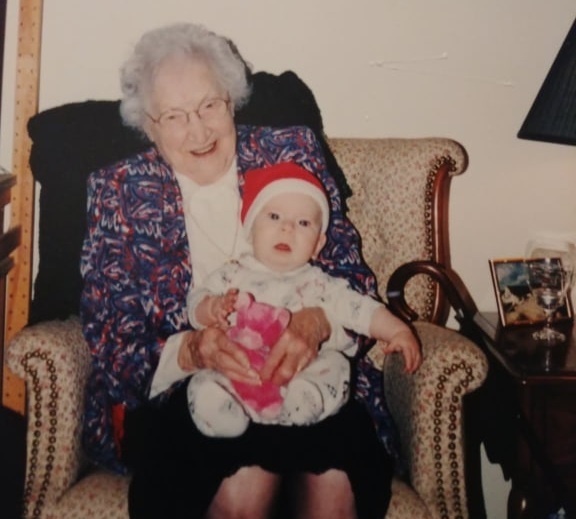 Kevin Judge, a coach and consultant, from the Canadian city of Ottawa, who coaches leadership and human resources for corporations, has the sweetest memories on his grandma Eva Pearl Moon. She taught him needlepoint and great values: how to be a good person, how to care for others and not be selfish. He calls her “a pretty cool cat”, because she lived to be 103.

“Though, she would tell you she was one year older,” Kevin says. “You see, the cool thing about grandma was, that she was two ages. She was born in the early 1900’s. At that time, my great-grandparents lived on a remote farm in Ontario, Canada. They would have to make a special trip by horse and carriage to register her, so they waited until the next child was born and got both birth certificates at the same time. Therefore, her birth date is one year off.

“What’s your grandma heritage?” I asked him.

“My grandma’s family came to Canada from Ireland in the early 1800’s, right before the big potato famine. They loaded their 12 kids onto the ship to move to Ontario, where they were given some land. One of the kids was lost at sea during the trip.”

“How terrible!” I gasped.

“What I remember most fondly about her is that she was a really great woman. When she married my grandfather, William Judge, she raised his siblings, along with her own three kids and was always willing to spend time with us, the grandkids. She played eight ball (pool). She taught me how play solitaire.”

“Tell me more about the needlepoint.”

“When I was 10 years old, she would take me to her old lady friends and teach me how to do needlepoint. It was very interesting for a young man to do. It relaxed me, kept me focused and taught me patience. Those skills transferred later to my profession, where to get results you have to be very focused. But she was also a badass. After my grandfather died, she lived another 25 years on her own. She outlived everybody she knew, other than her own children. Besides, she would say it as it is. At her centennial birthday, she looked at me and said quite honestly: “You’re getting fat.”

“There was one funny thing that happened at her 100th birthday. We had a nice party at a farm house, like a big family reunion. We had 75 guests under the tents outside, all age groups, the kids were running around. They put a nice comfortable chair for her on a little stage. We had a big cake for her. Everybody was going up and saying “hi” and giving her birthday wishes. She was smiling back at them. Then, when I went up to talk to her, she said: “Hold on a second, let me turn on my hearing aid. I want to hear what you’re saying.”

We had billboards up with things that had been invented during her lifetime, basically everything that happened in the last one hundred years: from black and white to color television, from new technology to the man landing on the moon, all sorts of stuff. She was fascinated by everything that was going on.

Her memory was sharp as a tack. She tried to keep herself sharp. She watched basketball on television, because there was so much action with the people running back and forth, that kept her mind sharp and active. She was also in good health and very capable of doing whatever she wanted. When she turned 100, she got the flu and they had to take her to the hospital. When I went to visit her, she said: “I’ve never been in the hospital in my entire life and I am never going back!” The only other time she went back to the hospital was in her last year, when she passed away in 2006. I miss her dearly.”