Thank You For Being Civil 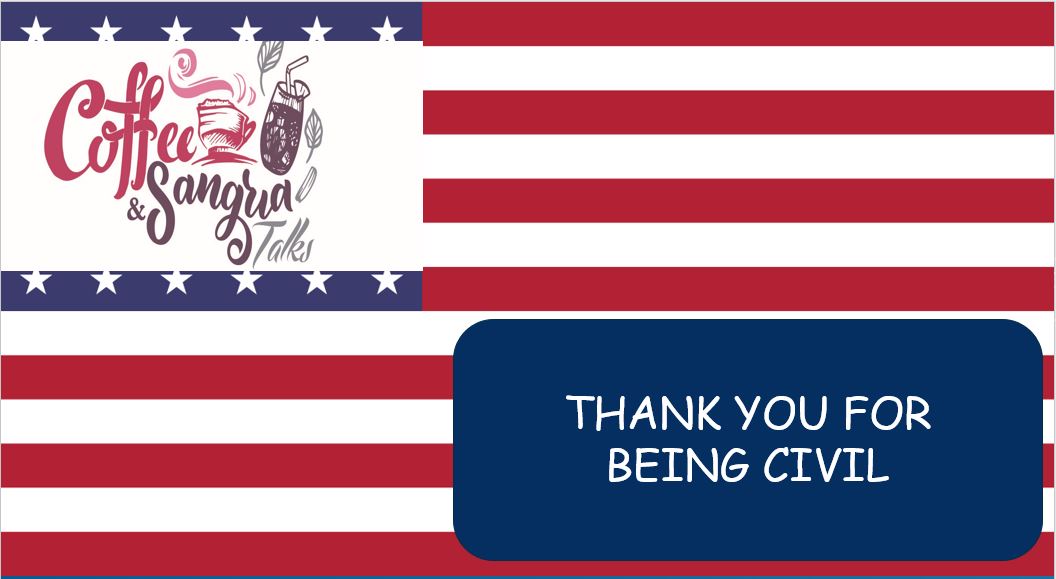 Thank You for Being Civil

Two weeks ago, I lunched a social experiment. I posted an opinion called Socialism: Don’t Compare God’s Gift with Fried Eggs. I know, I know, you’ll wondering, what the hell does it mean: “God’s Gift and Fried Eggs” in one sentence? The origin of this expression is coming from a very old Russian proverb that resembles the English expression that compares apples to oranges. Basically, it means these two are not the same. My post was asking the readers not to compare Soviet Union’s failed experiment to socialism, because Soviet Union was a dictatorship, not a socialist country.

But here comes the surprise. My post generated a lot of responses. The first came in the haters. One person posted on my page Coffee and Sangria Talks with Irina VanPatten: “Not all disabled look like this (a sign of a person in a wheelchair), some look like this (a sign of a Soviet flag with a sickle and hummer).” Then somebody called me an “useful idiot”. Jokes on you, dude. Because that’s an expression straight from the KGB operational manual. Who’s a commie now?

But when I was about to lose my cool and shut down my experiment, something has changed and I learned some valuable lessons in the process of how to stay civil while disagreeing politically on absolutely every subject: healthcare, immigration, wealth or what socialism really is or it’s not.

My next opponents were passionate. Passionate, but not belligerent. As we were trading our pros and contras back and forth, I’ve heard some thoughtful arguments on the other side. Not just usual insults and clinging to their own tribes.

My main argument was if you were make a fair comparison of what true socialism is, we should make the comparison to Scandinavian countries, not to Soviet Union. But Joseph McNeill from Washington state was convinced that “Scandinavian countries are hybrids, strong, free market capitalism’s that use socialist policies as a social safety net. There’s no comparison to be had. That’s why those aren’t socialist societies. They’re capitalist societies that have agreed to government redistribution.”

Though, I mostly disagreed with Joseph, I found Joseph to stand on his position in good faith, so I told him: “Thank you for a good argument. It amazes me how people deflect to insults rather than making a discussion. We don’t have to agree on everything, but at least, we can be civil.”

Joseph’s reaction was surprising: “Same to you,” he said. “Makes me cringe whenever I see someone who should be on my side, engaging in ad hominem or character assault in lieu of logos.” Apparently, people react positively when you treat them with respect.

When we moved to healthcare, I found out Stephen was a veteran, who was injured in Iraq and Afghanistan. Another reason of why I should not jump to conclusions and insult someone before I get to know my opponent.

Then as Joseph and I were fighting over immigration, naturally starting on opposites sides: me on a comprehensive immigration side, and he on “if somebody’s undocumented, they must go” side, we found a common ground in the end. We both agreed (still without insults), that American economy needs more workers, therefore there should be more legal workers’ visas allowed.

Then Nick Grant came into conversation. His poster on his Facebook page: “Stop hating Smartasses”, was implying he was going to be a smartass himself.  “I’m a middle class non college graduate, and I will say the current system does me very well. The rich are rich for a reason,” he said. Oh, he was not giving up on capitalism easily, but he kept making his arguments as if my project wasn’t call “Don’t Compare God’s Gift with Fried Eggs”.

“The peoples parties (doesn’t matter what country or government) will always fall under a social/communist economy. The people’s car? State health insurance? Disarmament? State sponsored schooling? That fits the bill in Russia under Stalin, China under Mao, Germany under Hitler, Italy under Mussolini. All of them have amazing body counts. Don’t forget who uses that economic ideology to their gain,” he said. Didn’t we just talk about this?

“You just made the point that all these regimes were dictatorships,” I responded. “That was the whole point of this conversation. All dictators give themselves pretty names. That’s why we should not read into names only, but into substance.”

Then came the dynamic duo: the conservative Stephan Surtees from California and the liberal Madison Dines from Oregon. Nothing was suggesting that these two gentlemen would get along. Especially that Stephan’s convictions were very clear from the start: “Socialism is Totalitarianism. Didn’t we learn this already? If you were in charge, I’m sure you would usher in the great Utopia. This is crazy and very self-righteous.” Oh, this big academic words like “totalitarianism”, “Utopia”, “self-righteous” from a union construction worker! Another reason why I should not judge someone by his profession.

But here came in Torrin Wheeler in the middle of this: “You’re right, Utopia doesn’t exist, but look around. This is hardly the best we can do.”

Stephen had to prove to Torrin that America is better just the way it is: ”Why does everybody want to come here? What country has encouraged and produced more innovation and opportunity? We are actually over-privileged Americans that are lucky to live in a country where you could become self-made. There are people crossing the desert as we speak, that believe in that more than you.” Then he demanded Madison provides some good examples where socialism actually worked.

What? The plot was thickening!

Madison Dines rebuked this argument with: “Common misconception, Mr. Construction guy. Capitalism requires rules, or you get industry cartels that crush competitiveness. Just so everyone is clear, socialism has never ruled out capitalism, also being present at the same time, in the same society.

What you all don’t realize is that capitalism can absolutely coexist with socialism. Anybody with more than a college 101 political theory education should have already covered this. Socialism does not erase the existence of capitalism unless it is intended that way. Socialism is the distribution of the means of production and the power of Capital to the people, to the state, or both. In Norway, government and workers own the means of production.”

Stephen rushed back with: “Pick yourself up, bro. You can make something of yourself, if you want to.” It turned out, Madison was an engineer, and did just fine for himself. Well, who’s jumping to conclusions now?

Then we stepped into the healthcare discussion. I was arguing that health care was a right. Stephen didn’t believe in that because, in his opinion, “government is not our mom and dad”. It was clear we didn’t see eye to eye, but I said nevertheless: “I appreciate you keeping it civil. Since you are talking calmly about it, I can see where you are coming from, though we disagree. Thank very much.”

“Thank you for also keeping it civil with me.” Stephen said. “I have family members that won’t even talk to me anymore over subjects like this.” What a concept: just talking to somebody who can hear you out, while disagreeing with you!

Thank you for being civil, everyone! We shall do it again.